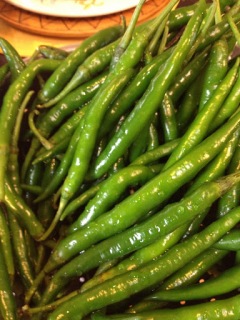 Wash the peppers and dry them with a paper towel really well.  Make sure to discard any spoiled peppers. 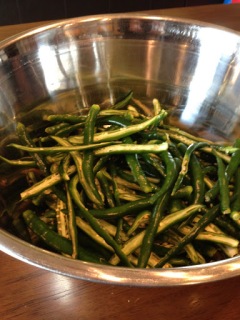 Carefully slit the peppers lengthwise, be careful not to break them and place into a large bowl. 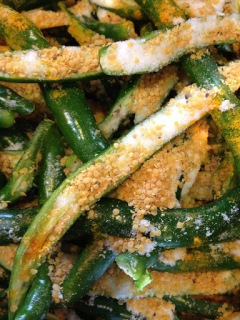 Sprinkle with the salt, turmeric and mustard seeds. 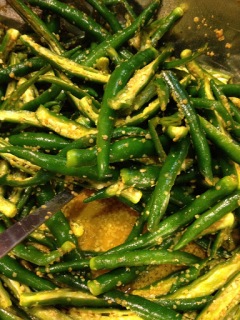 Pour the lemon juice and oil over the peppers and gently stir to coat with the spices.

Spoon into impeccably clean and dry glass jars.
Divide the juice equally amongst the jars.
The peppers will not be submerged in the juices.  There will be a bit of liquid at the base of each jar.
Close tightly and refrigerate.
Gently shake the jar every day to allow the spices to coat the peppers.
The Raito will be ready in about a week.
This pickle will keep for about 2-3 months (or longer) in the refrigerator, if you can keep your hands off them!

Serve alongside a creamy curry with rice and ghee,  for a lip-smackingly good eat.

Tips
Although making Raito is a fairly simple recipe, it is important to keep the ingredients and utensils really dry to prevent mold.  If there is any sign of mold on the washed peppers, do not use them.  All your well spent time and energy will be lost, as the Raito will spoil, even when refrigerated.
The skinless mustard seeds, called Rai-kuria, can be found at a good indian store.
I like to buy the Serrano peppers at an Indian Store for two reasons.  One, they have the freshest and two, the peppers are longer (around 5″) that are great for this recipe.
Raito can sometimes be confused with Raita, a popular yogurt dish served alongside many indian dishes.

Memories
Raito is eaten at home, almost daily, and during many festivities including weddings.  I grew up eating it as a condiment and only a few years ago learned a new way of eating it.  I was at a wedding in New Jersey where Raito was served as an appetizer paired with a savory snack called Ghantia.  It has become one of my favorite midnight snacks – a few handfuls of ghantia or potato chips and a few pieces of Raito and I’m set!

I hope you enjoy making Raito.  Let me know what you think, I’d love to hear from you all.

Please, For the Love Of Ghee, let me know what you think! Cancel reply

Search for a recipe

Ooey gooey cheesy mac’n cheese. When only a bowlful of hugs will do 😋 This heart warming bowl of comfort food will do just that - give you hug after hug with each bite 😃
Sometimes we need to feel grounded and that’s ok. Adding grounding food to your diet like root vegetables will help. I understand it’s better to eat seasonal foods because they are fresh but it’s ok do to the opposite too.
I wish you could smell the delicious aromas wafting from this pan of masala chicken fried in gheey onions. The caramelized garlic intermingled with the fresh pounded red 🌶 and Indian spices is downright tantalizing.
“Quinoa Ladoo! You can’t be serious!” I’m asked in disbelief as I serve the little brown malty balls of delight with an afternoon cup of chaa. Yes, my friends, you heard that right, Quinoa!
My Turkey ‘Chapli’ kebaabs are super moist and packed with Uber amounts of flavor! There’s Ginger, garlic, cilantro and loads of delicious spices too. And did I mention they’re easy to make.
Eid Mubarak everyone! Been a busy week baking and cooking. We are so lucky to have the freedom to practice our culture and religion. And we are lucky enough to overcome COVID in this part of the world. Thoughts and prayers to all this who can’t practice their religion and who are suffering from the atrocities from COVID. Here’s to wishing peace and good health to the people of Mother Earth 🌏
This is by far my most favorite thing to do with leftover rice. I made this frequently after a long day at work in New York City. It's so quick and easy to make you're going to love it!
Rose syrup on ice. The perfect boost for energy or a calming tonic. My grandma and mum would have it after a hard day's work. One of my aunt's favorite saying was “Pressure oothryo!” 😅 In kachi it means the pressure is off or the blood pressure is gone down. 😂
Happy 🌍 day! My deliciously seasoned curried cabbage is sure to turn your🌎around. Growing up in Zimbabwe I ate a lot of cabbage and fresh leafy vegetables with my rice or sadza.